Stop evictions and rent inflation, hear the call of the Renter Nation!

The chants and drums resounded as the R Visions People’s Tour wound its way through the streets of Chinatown. About a hundred residents and community activists joined a march and rally today to call for increased action by city government to protect working class neighborhoods. Stopping at different sites marked by community art installations, community members spoke to the different strategies for stabilizing Chinatown’s future.

Yue Mei Zhong is a tenant whose landlord has asked her to move out by October 1 but has been unable to find a new apartment.

“We want to remain here.  This is my community.  This is my home,” said Zhong.  “We need laws that help us stay in our home, like a Just Cause Eviction Law.”

In the face of rising rents and displacement, the Chinese Progressive Association and other members of the Right to Remain Coalition are calling for the outlawing of no-fault evictions. Other cities across the country have adopted Just Cause Eviction Laws to protect tenants by establishing a set number of allowable reasons for an eviction, such as illegal activity, non-payment of rent, or violation of a lease.

At Parcel R1, a public parcel leased to Tufts Medical Center as a parking lot, a “yarn bomb” installation read “R Right to Remain” in English and Chinese; marchers called for community control of public parcels so that these can be developed for neighborhood priorities such as affordable housing and a Chinatown library.

Marchers stopped at two brick row houses on Hudson Street and particularly highlighted the plight of tenants in Chinatown’s privately owned, older brick row houses.  Escalated real estate values have triggered home sales by many of Chinatown’s longtime family owners, often to developers or investors who put cash on the table with a focus on the upscale market.

Community activists are trying different strategies to keep tenants in their homes and to preserve the row houses as affordable housing. Organizers from the Chinese Progressive Association fear that developers like First Suffolk LLC, which purchased adjacent row houses on Hudson Street this year, aim to demolish the run-down buildings in order to build a more lucrative luxury project. Marchers said they oppose any demolition and called for a five-year rental agreement for current tenants, while proposing broader policies to protect Chinatown’s row houses.

“Why can’t we create a Neighborhood Conservation District that focuses on protecting the row house streets of Chinatown, discouraging flippers, and giving greater resident control over demolition, renovation and development on these streets?” asked Chinese Progressive Association Co-Director Lydia Lowe.

WBUR: “Those Flags Popping Up in Chinatown? They’re Art Protesting People Being Priced Out” 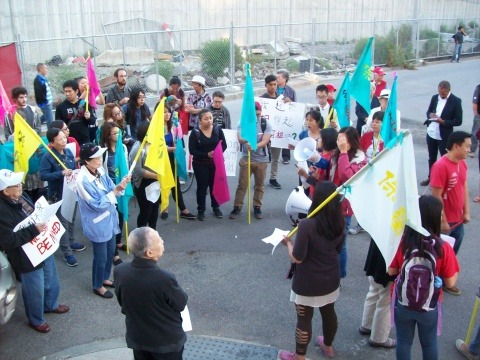