On August 17 and 19th, the 8 Chinese Youth Initiative summer interns held a public community event at the Chinatown Gate to promote the need for a Chinatown Library.  As part of their summer project the interns provided free storytime, books, activity packets, and information about the campaign, replicating many of the services a library would provide.  The youth informed community members about the history of the Chinatown Library and collected signed postcards calling on the Boston Redevelopment Authority to use the remaining public land in Chinatown for public good.

Currently, Chinatown is one of the few neighborhoods in Boston that does not have a public branch library.  Chinatown’s public library branch was demolished in 1956 during urban renewal for the construction of the Central Artery.  In June 2015, CYI in partnership with the Chinatown Cultural Center Committee (CCC) presented a community vision for a Chinatown Branch Library based on focus groups conducted with youth, parents, and elderly. Some major themes from this vision are that community members see a Chinatown Library providing a community cultural space, gathering space, education preparedness, resources for immigrant families, as well as entertainment and fun.  Through “AIM TO RECLAIM: The Chinatown Library Campaign,” CYI provided a temporary library space that responds to the themes from the community’s vision, raise awareness about the need for a branch library to return to Chinatown, and highlight how public space should be utilized for community use.

The youth put on the event as part of their seven week internship.  As part of the intensive program, the youth learned about Asian American history, Chinatown, community organizing, and social justice.  They also completed a four-part series with Allies Working with Asian Youth (AWAY) to learn about police brutality and #BlackLivesMatter.  Youth said they learned to “fight fiercely and passionately for the things you believe in. Be an ally and stand up for what is right. People power is effective and the power is in the people.”  Youth also developed deep bonds.  One youth she learned, “Strangers can become the closest family to you.” 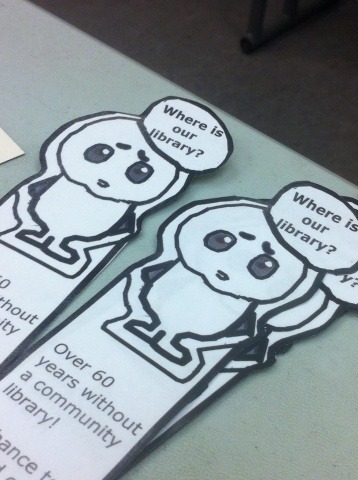