Displaced tenants and their supporters set up tents in Quincy Center this afternoon to protest the actions of First Suffolk LLC, a development company based in the law offices of Matera Vopat Matera & Johnson in Quincy Center.

Tenants from Boston Chinatown described First Suffolk’s alleged acts of harassment to force them out of their homes and demolish the buildings. First Suffolk began acquiring the Chinatown properties at 101 and 103 Hudson Street in January of this year and is under court order to bring the buildings up to health and safety codes.  Tenants say the owner has instead focused on intimidating the tenants and calling for demolition of their homes.

Tenants of 103 Hudson described First Suffolk representatives forcing their way into tenants’ homes and changing locks without notice, refusing to allow tenants access to their belongings in the building, moving out the kitchen stove, and sledge-hammering doors and walls unnecessarily in the process of starting emergency repairs. They were forced to leave the building in January and are currently living in a hotel in Quincy.

Yan Nong Yu of 103 Hudson Street asked supporters to help the tenants return to their homes. “It is so tragic,” she said, as she broke into tears. “Chinatown is our home! We can’t let them force us out.”

Tenants at 101 Hudson, who remain in their building, fear the same may be in store for them. Last week, they received notice that water services would be shut off on May 11 due to non-payment. 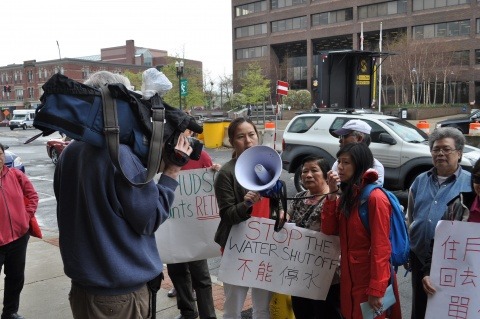 “The landlord has a lot of money to buy buildings, but he doesn’t have the money to pay for the utility bill?” said 101 Hudson Street tenant Luan Jiao Lin.  “We know the 103 Hudson tenants have been forced out of their homes since January, and we are just telling the landlord to do the right thing and not force us out.”

Baolian Kuang, from the Chinese Progressive Association, said “We will continue to oppose demolition and support the tenants’ right to return and remain in their homes.”