Over 300 People Attend the Right to Remain Block Party

On July 25 we co-sponsored a Right to Remain Block Party on Johnny Court and Maple Place with the Chinatown Residents Association!

Over 300 participants at the block party learned about tenant rights, affordable housing, and talked about how to preserve the historic row houses. There were tables featuring information on the library campaign, the CPA workers center, a public parcels visioning process, tenant rights trivia, a film screening about gentrification across Boston, the Chinatown Community Land Trust, and the Chinatown Residents Association. There were also fun activities such as a photobooth, a chopsticks and marbles game, a paper lantern home making station, lots of musical performances, a skit, and a watermelon eating contest.

A huge hit was the obstacle course where each task was themed based on a community stabilization goal–more affordable housing than luxury development, a community library, good living conditions, community control of land, job access, and the right to organize!

There were two pieces of art showcased as part of the R Visions for Chinatown art intervention project–a preview of “Flagging Chinatown” with flags featuring bilingual stabilization slogans, and a Chinatown mural accompanied with audio recordings from multilingual interviews of residents.

Click here to see more photos from the event 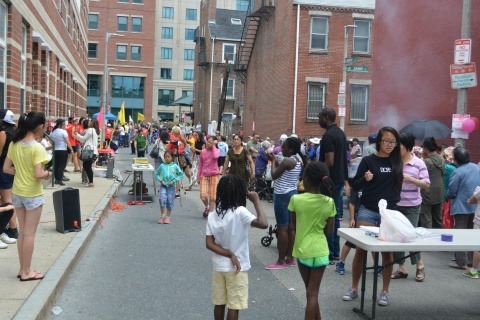