Up with the Wages, Down with the Rents!

Stop evictions and rent inflation—hear the call of the renter nation!  Chants echoed down the street as Right to the City and the Boston Tenant Coalition held a rally and press conference today, announcing the release of The Rise of the Renter Nation, a national report on affordable housing. Today’s press conference in the Four Corners neighborhood was one of nine actions taking place in cities across the country.

Rents have continued to rise while wages have remained stagnant. This was a consistent refrain as tenants from Roxbury, Chinatown, East Boston, and Dorchester talked about their struggles against eviction and displacement. Rally participants held photo posters contrasting individuals’ low wages with the high rents they are paying. Tenants from East Boston and Chinatown both spoke of landlords who planned to renovate their apartments in order to charge $3,000 a month in rent.

“The landlord said he is going to charge $3,000 a month, and he’s trying to add two units to the building,” said Chinatown tenant Li Er Li.  “And that’s why they want my family out. It’s really hard to find a place to move out. I’ve been filling out lots of housing applications, but there’s still no word.” 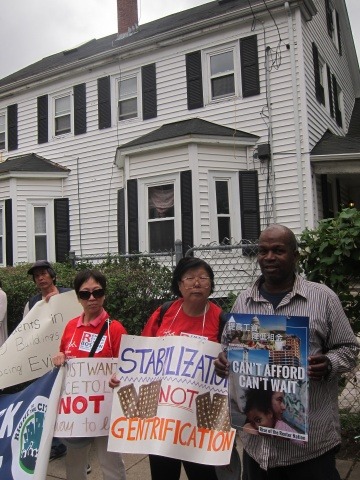 Former Roxbury homeowner Paul Adamson lost his home in the foreclosure crisis.  Adamson and his wife occupied the vacant home at 193 Norwell Street, where the rally was held this weekend, only to be forced out by police yesterday. He commented on the irony of homes sitting vacant while homelessness rises. “This whole situation could have been avoided. There is an offer from a nonprofit to acquire this property and put it in the hands of caring residents, who will live in it and be part of this community, because they are from this community.  Fannie Mae has an obligation to keep and create affordable housing throughout this country, and they have not done it.  I stand in solidarity with everyone who’s facing the same struggle and deserves an equal opportunity to remain in their homes.”

According to the report, the current affordable crisis is marked by private investors buying up rental properties in the wake of the foreclosure crisis. The foreclosure crisis spurred a massive influx of new renters into the housing market, overwhelmingly low income and people of color. In Boston, one of the most rapidly gentrifying cities in the nation, with a particularly high percentage of renters, this has led to widespread battles over displacement.

Boston Tenant Coalition speaker Kathy Brown noted that Mayor Walsh is preparing his municipal housing plan for release next month, and highlighted the importance of increasing resources for affordable housing, including by raising pay-out of Inclusionary Zoning policy (IDP).  She called for targeting those resources to keep low and moderate-income residents in their homes and neighborhoods.  To make sure the housing units created are truly affordable, Brown noted it is key to use city and neighborhood income when directing affordable housing resources instead of the Area Median Income that averages in wealthy suburbs.

Right to the City Coordinator Darnell Johnson called for support for tenant organizing, such as penalties for no fault evictions and a priority for tenants who are victims of no fault evictions to return to their neighborhood. Lydia Lowe of the Chinese Progressive Association called for public land for the public good, noting that a new development proposal approved by the former administration for a public parcel on the East Boston waterfront includes only 20 percent affordability.

READ REPORT: To read a digital copy online or purchase a printed copy of the national report go to: homesforall.org

·        Between 2006 and 2012, there have been over 4,500 families that have been foreclosed just in the City of Boston. The vast majority of these families have been displaced and pushed into the rental market.

·        Many cannot afford market-rate apartments, leading to homelessness. As of March 2014, there are about 4,400 families with children and pregnant women in Massachusetts Emergency Assistance Shelter Program, half of which are sheltered in motels.

·        According to January MLS data, the average residential real estate rental price for a one-bedroom unit in Boston is presently $2,400, which requires an income of at least $96,000 to afford. Median household income for Boston renters is $37,000.

·        In Boston, 61% of low-price census tracts saw gentrification, making it among the most quickly gentrifying city in the nation.

·        Annual rent appreciation is increasing in East Boston by 12%, in Roxbury by 7.4%, and the Chinatown zip code now has the highest percentage of households with incomes over $100,000 in the city.